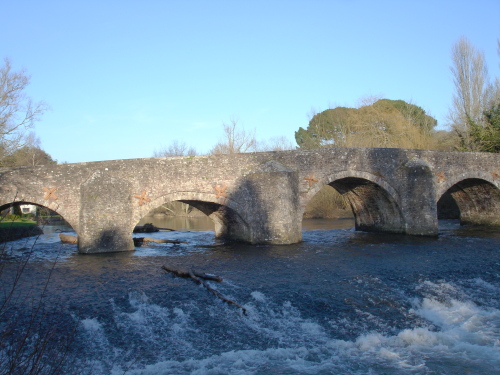 The attractive village of Bickleigh nestles in a steep-sided stretch of the Exe valley four miles downstream from Tiverton. At its heart is a sturdy stone bridge that straddles the Exe on the A396 road to Exeter. The bridge that now stands was built in 1809 following severe flood damage to the existing structure. Perhaps the new bridge was wide enough for the transport of the time, but the roadway cannot accommodate more than a single lane of modern day traffic, and with no pavement for pedestrians the bridge is a congestion bottleneck. The original bridge, dating from the late 16th century, may have been even narrower: Harding's 1845 History of Tiverton mentions that in 1772:

Bickleigh bridge of five arches, over the river Exe, was extensively repaired, at the expense of the parish, previously to which there is reason to believe, it was only a horse bridge.

Prince's "Worthies of Devon" published in 1699 tells of an altercation on the bridge between Sir Alexander Cruwys, Lord of the Manor of nearby Cruwys Morchard, and an unnamed member of the influential Carew family who made Devon their base from the 12th century. Cruwys was the victor, his opponent being smitten with a sword and dispatched into the waters of the Exe. Sir Alexander's ghost in full armour, head under his arm, is said to ride a charger across Bickleigh Bridge at midnight once a year on mid-summer's day. According to Haunted Pubs in Devon, the dramatic encounter on the bridge look place in 1332. Alexander was a common choice of name for the Cruwys, but few of them were knights, and if 1332 is correct the protagonist must be the Alexander who was Lord of the Manor from 1310 to 1331. According to Hoskins [1a] the bridge was first erected in its current location in the late 16th century, more than two hundred years after Sir Alexander's fateful encounter, but apparitions don't play by the rules, do they?

Cruwys was condemned to death for his dastardly act but, as was the custom, he was spared the gallows by dint of his wealth [1b]:

Sir Alexander Cruwys slew one Mr Carew, and for that fact was condemned to be hanged, but in order to procure his reprieve or pardon, he sold twenty-two manors of land.

The Carews eventually acquired Bickleigh (in 1510), which they retained until it was sold in the early 20th century. The Cruwys family have been established in the area even longer than the Carews, having farmed at Cruwys Morchard from 1175 to this day.

A legend of a different kind concerning Bickleigh Bridge was also found to be without substance. It had long been claimed locally that Simon and Garfunkel were singing about this bridge in their 1970 hit "Bridge Over Troubled Water", as it was known that they visited the area in the 1960s. However, in a 2003 interview with the BBC, Art Garfunkel finally laid this one to rest:

Bridge Over Troubled Water is a gospel phrase which Paul took from a gospel group. It was in a Baptist church hymn. He liked the phrase and he used it.

Bickleigh Castle and the odd collection of buildings of various ages that surround it is well worth a visit if, like me, you're interested in Devon's heritage. Follow the signs to the castle that lead you down a quiet road some half a mile from Bickleigh Bridge off the A3072 Crediton road.

A short distance down this road the imposing gatehouse of the castle comes into view, as does the charming thatched chapel on the river side of the road. The moated and fortified Norman manor-house was first occupied by the de Bickleigh family in the 12th century and some of the bases of the imposts in the gatehouse date from this period. Apart from the gatehouse and the chapel, the remaining buildings were flattened during the Civil War by the Parliamentarians under General Fairfax after their seizure of Tiverton. This was in revenge for the incumbent Sir Henry Carew's known Royalist sympathies. Prior to its most recent restoration in the early 20th century the castle was known variously as Bickleigh Court or Bickleigh Court Castle, while Prince referred to it as Bickleigh House. 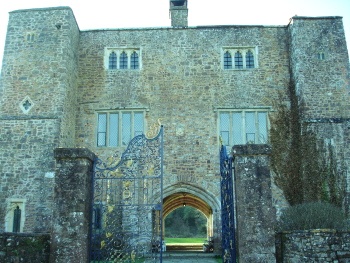 Bickleigh Castle gatehouse and moat seen from the south side

Early in the 15th century the Bickleigh estate passed to the powerful Courtenay family who inherited the Earl of Devon title in 1335 which they hold to this day. Their seat is Powderham Castle, Devon's grandest castle situated near Starcross at the mouth of the Exe. Like Bickleigh Castle, it is actually a fortified manor-house. At this time the Courtenays were also masters of Tiverton and Okehampton castles. Bickleigh Court was used as the residence for their younger sons.

The outcome of a forbidden love affair and subsequent heroism on the battlefield was that the Courtenays eventually transferred ownership of Bickleigh Castle to the Carew family who retained it for the next four hundred years.

One of the Courtenay sons died, leaving an orphaned daughter, Elizabeth. Her grandfather, Sir Philip Courtenay, asked his cousin William Carew and his wife to live in the Castle and look after her. When Elizabeth grew up, William Carew's younger brother, Thomas, fell in love with her making a runaway marriage against her grandfather's wishes. To escape the wrath of Elizabeth's family Thomas Carew "being young and lusty, of an active body, and a courageous mind . . . resolved for the wars" and, after distinguishing himself at the battle of Flodden Field when he saved the life of his commander-in-chief Lord Howard, he returned home full of honour and with the assured friendship of Lord Howard who espoused his cause with Elizabeth's family. As a result Sir Philip Courtenay gave the Castle to Elizabeth as her marriage portion.


The gatehouse, reconstructed by the Sir Henry Carew after the restoration of the monarchy, is three storeys high with a rib-vaulted passageway on the ground floor. A thatch and cob farmhouse was also built to the north of the former courtyard at this time. Sir Henry died leaving no male heir and the estate passed to his daughter who was married to a cousin, Sir Thomas Carew of Haccombe, thereby retaining the family name. From this time until the early 1900s the younger sons of the Carews occasionally lived in one of the castle buildings when serving as rector of Bickleigh church. The other buildings were used for farm storage.

The buildings other than the gatehouse gradually fell into disrepair, as this account from 1819 illustrates [2]:

Bickleigh Court Castle, situated on the banks of the Exe, about one mile from Bickleigh, is an ancient and romantic ruin. Prince quaintly remarks, "As for Bickleigh House, 'tis ancient pile, built with turetts, and moated round with water, which whether it may conduce most to the health of the inhabitants, it becomes them most that must live there to enquire after." The turrets are now levelled low in the dust, and the boundaries of the moat are no longer to be distinguished. The remains of a chapel at a little distance are converted into a barn; and the walls of the castle which were wont to resound with the praises of the fair, where streamed the banners and hung the polished armour, are now used as a cider cellar. The remains of gothic arches, enriched cornices, and stone carvings, intimate that a considerable degree of splendour attached to this baronial court. The principal entrance is under a strong pointed gothic arch towards the Exe, and the roof of the passage, which is still entire, is of admirable workmanship. Considerable danger attends exploring the ruins from its dilapidated state- the wind whistles through the shattered and unroofed walls, and birds find a safe asylum in the twining ivy. The drawing was taken from the new road; it presents a view of the castle with the rich woods and slopes behind. The castle is the property of Sir Henry Carew, of Haccombe. 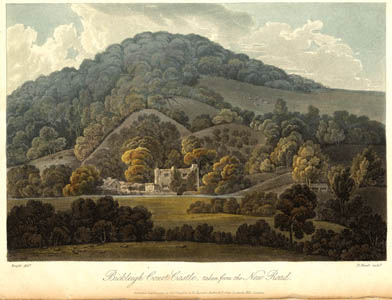 Aquatint of Bickleigh Court Castle in the distance 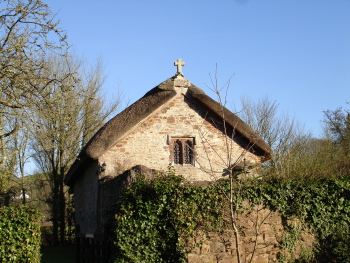 The Carew family sold the estate in 1923, after which the castle and adjoining buildings were restored to their present form, with the picturesque partially moated gardens embellished by the attractive Italian gates at the front and the south side. The present owners (since 2003) have established the property as a venue for exclusive weddings and other paying guests, and the castle interior is not generally accessible to the non-resident public. The chapel is used for wedding blessings, and is said to be the oldest complete building in Devon dating from 1090. 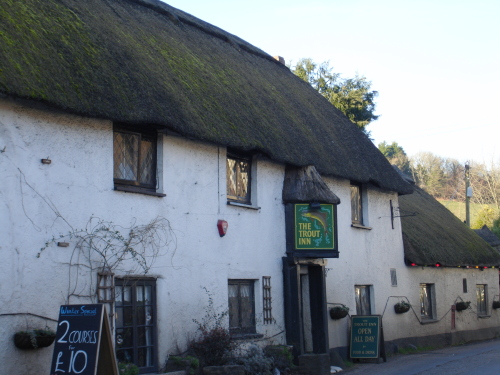 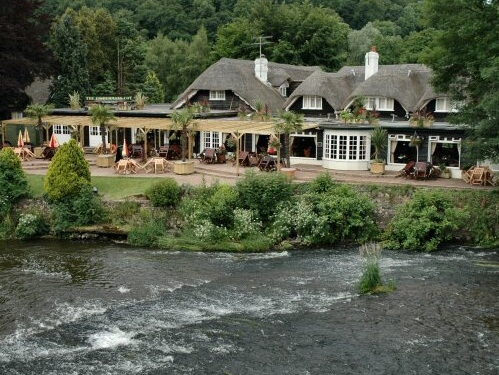 A hotel-cum-pub in a splendid riverside setting 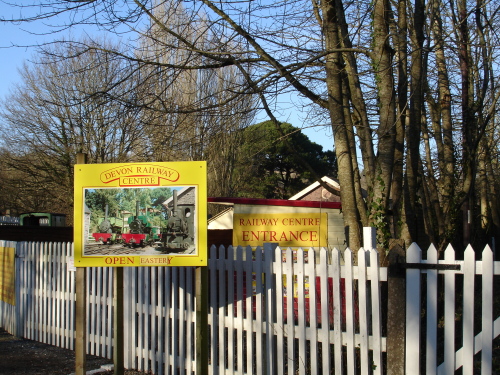 Based around a restoration of the disused Bickleigh station 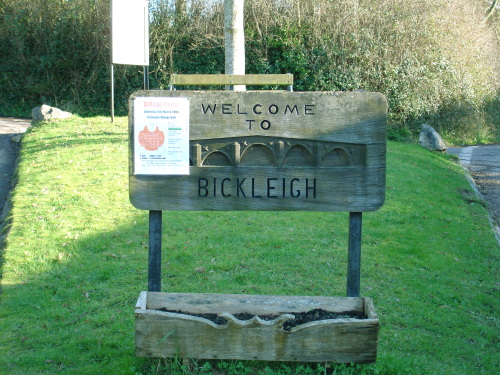 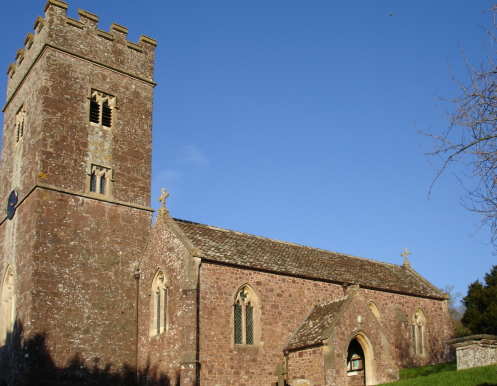 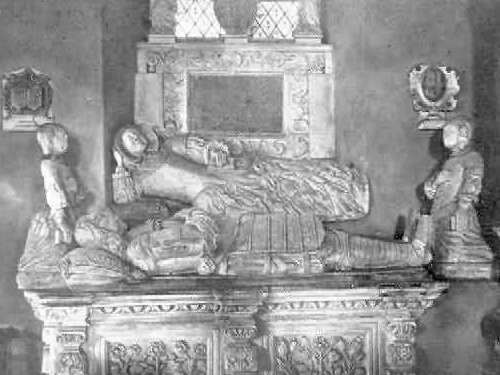 The aquatint of Bickleigh Court Castle is reproduced from the Devon Libraries Local Studies Service Etched on Devon's Memory series.